A large hurdle for mainstream adoption of renewable energy is the problem of power storage. How do you keep electricity flowing when the sun goes down or the wind stops blowing? The common solution, batteries, is expensive both in initial costs and maintenance. In large scale power generation this simply isn’t a feasible option, demoting green energy to the status of part-time provider.

Being sort of a mechanics geek, I've often wondered why I never see a means of mechanical power storage and release as an alternative to batteries. 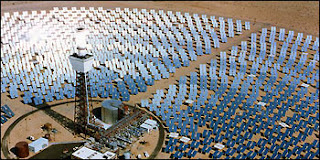 Let’s look at a solar farm for example. To me, the massive collector tower at the center of this solar farm is just begging for a gravity-fed mechanical solution. This particular demonstration plant called Solar Two near Barstow, California, was decommissioned in 1999. Newer plants mostly use trough systems which do away with towers but similar solutions could be adapted for use there also. 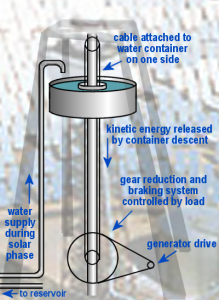 In the very much simplified example to the left, water is supplied to a collection tank by a pump and/or steam condensation during the solar collection phase. When sunlight is no longer available the container is released so that it slowly descends with the aid of a highly reduced gear/cable mechanism and drives a generator to produce power through the night.

When the sun rises, the generator is switched back to the steam powered turbines, water is released back to the reservoir, the empty container raised, then the process repeats.

As I said, this would be a greatly simplified explanation of the actual implementation of such a system but I believe the general concept to be sound.

Mechanical energy storage is often dismissed as low-tech or antiquated technology. That may be true. This doesn’t mean that it doesn’t have useful applications. The energy lost between electrical to mechanical conversion is almost always greater than in mechanical to mechanical. And no matter how ingenious or innovative your energy source, turning a generator is always a mechanical process.

If you know of anyone who may be interested, please pass this on. I would love to get feedback or criticism on my thoughts. Also, feel free to contact me through Google+ if you would like a more detailed description of the mechanics or alternate configurations. All original ideas expressed within this article are to be considered public domain prior art, and not available for use in patent applications.
Posted by Scott Jordan at 10:36 AM