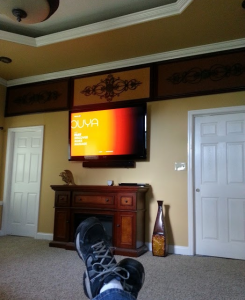 The reviews and articles I've read on the new Ouya game console seem to be missing an important idea behind the product. It's not really a competitor to Microsoft of Sony. They're different animals altogether. While an XBox is purely a mechanism for the delivery of games, the Ouya is much less of a consumer product. Sure, it connects to your television so that you can play games using controllers, but that's where the similarity ends.

What Ouya is really selling, in my opinion anyway, is openness. Think about it, what is the last major electronic product you can remember that was designed to be hacked? To be taken apart, rooted, and used in a manner contrary to how it was advertised, without voiding its warranty!? Not only can you change its operating system, but you can write your own apps or games. A software developer kit comes pre-loaded onto the console for free.

Comparing the Ouya to other consoles is like comparing an arduino to a toy robot. The robot is shiny and refined. It does exactly what it is designed to do. The arduino, on the other hand, doesn't do much out of the box, but can be programmed to do whatever your imagination and curiosity design it to do.

I've been playing with my pre-release backer version of the console for about a week now and I can't wait for it to go public so people will start posting hacks and attachments. In the picture above, I'm sitting across my bedroom about 20 feet from the console. The wireless controllers work well. So far, the most frustrating part of my experience has been figuring out how to leave a game. Most of the games available seemed to have been designed for Android tablets and my controller doesn't have a home or back button.

If you're the type who likes to take apart your toys, or especially if you have children who need an outlet for their curiosity, I highly recommend getting your hands on a Ouya console!
Posted by Scott Jordan at 6:45 PM