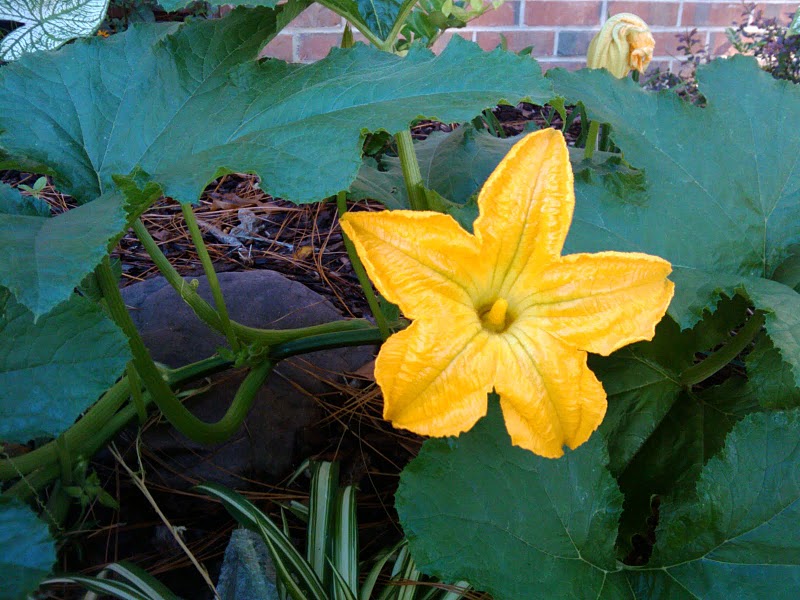 Hows that for a title, huh? Let me give you a little background. About a month ago, my wife bought this evil insect killing kit called the Fatal Funnel to kill wasps building nests on our front porch. A yellow plastic flower from the kit is embedded into the side of a two liter soda bottle to create a very deceptive and effective trap.
We placed the bottle with it's inviting yellow flower on our porch rail and my wife was quite pleased with herself as the layer of drowned insects began to grow at the bottom of the bottle. After a couple of weeks we had collected enough insect soup to sustain Bear Grills (and camera man) for days in the wild. 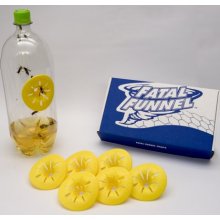 As we were enjoying our wasp-free porch though, nature had been twisting it's fate up through our pine bark pebbles in the form of a beautiful, healthy pumpkin vine. By the time we noticed it, there were a couple feet of vine. Now, Halloween is out favorite holiday and we have a big pumpkin carving tradition so we were happy so see it take over our flower bed but its first yellow bloom brought to mind a major problem.
Yes, I'm sure you've figured this out already. The vine needs to be pollinated to produce pumpkins, yet all of the buzzing creatures that like yellow flowers are now rotting in the bottom of a coke bottle. Having destroyed the balance of nature, my wife has agreed to go out and transfer the pollen from the male to female flowers herself using an art brush. I now refer to her as the Pumpkin Sex Fairy. Right now the vine is a complete stamen fest. The male flowers usually start to appear about a week or two before the females. Hopefully some females will appear soon so I can get some shots of the Pumpkin Sex Fairy in action.
Posted by Scott Jordan at 4:34 PM